While the main strand in Theoretical Immunology is clearly based on a crystal clear understanding of all the biochemical reactions involved in the process of contagion (to deepen this point from my research perspective, please see also the SubSection "Biological Cybernetics" in this Research section of my website) and infection is under construction, certainly scientists must face taking care of the quality of life of the present mankind despite such a knowledge is largely unavailable: To contribute to accomplish this task this section is due and in the first part of this page I'll discuss some effective stochastic.approaches that can be pursued when lacking of biological knowledge is consistent yet a fast protocol for handling a disease has to be mandatorily produced.

Indeed, part of my research consists in completely skipping any biological detail regarding the process of infection, instead, here we try to understand the state of a patient only using alternative techniques, prevalently hidden Markov chain and Pavlovian reflex, driven by high data provided by the American Food and Drug Administration and partially in collaboration with Pfizer farms. 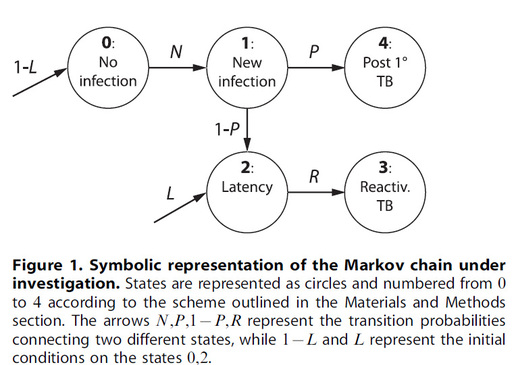 We start with Tuberculosis (TB) as a guide example. The problem is the following: Suppose you suffer of arthritis reumatoids -a quite common disease in elderly- and you take monoclonal antibodies to prevent autoimmune damage on your tissues. These biological drugs however block the cytokine "tumor necrosis factor" which is implied also in other functions, among which it keeps granulomas stable -where tuberculosis is kept letargic (in  patients that contracted the infection in the past).

While the procedure against arthritis reumatoids keeps going you become sick by tuberculosis.
Now, have you taken it from scratch or it was a past infection that arose back due to biological inhibitors of tumore necrosis factor? 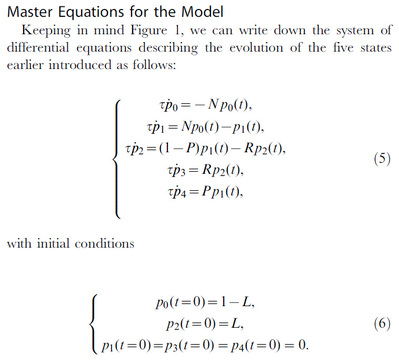 Answering this question within a fully biological dialectics is out of actual scientific possibilities, however, a completely new approach -able to find with remarkable precision- has been built (by us in the paper n. 44) and works as follows: let us assume "logical steps" in which the patient can be involved, as those summarized in Figure One. Each of the patients undergoing treatments with biologic drugs may be in one of those Markov states. However the system of coupled stochastic ODEs determining the flow of probability distribution among these states can be solved trivially and we can obtain the solutions analytically. Once these have been obtained, due to massive data storage by the American Food and Drug Administration, we can extremize the parameters (L, N, P, R) of the equations over the real data and obtain the best fits for the important parameters that are R and P: If R is high, that means that the patient was an healty carrier and drugs caused the reactivation of TB. Otherwise, the infection is a new infection and not (yet) link with pharmaceutics can be inferred.
On the left the system of equations for the evolution of the probability flow is shown. Results for tuberculosis and for mycobacterium avium follow.

Hidden Markov Chain for Mycobacterium Avium: Safety screening (for bio-drugs) can be avoided!

Note that the conclusion that -for mycobacterium avium- the safety screening before the usage of biological drugs (monoclonal antibodies) implies a consistent saving of public money and is achieved for free noticing that the infection curve (Fig.6) is even!

Pavlov reflex in the immune system: The cases of fibromialgia and CFS

Conceptual analogies among neural networks and immune networks (e.g. lymphocyte networks) are densely sparse in the scientific literature. However, for a plethora of historical and pragmatical reasons, investigations in the first field (neural) begun much earlier (mainly because dialogues among neurons happen via electric signals [whose physics was clear since the Belle Epoque], while dialogues between white cells are mediated by diffusing chemical messengers [whose discovery started in the 80's and it is not over yet]). As a consequence by far more results have been obtained in the past decades if compared with the immunological counterpart and nowadays we can grab ideas stemmed in the first scenario and carefully adapt them toward the latter.
The analogy allowing us to try this route is quite sound as it actually lies at the core description of these systems as both of them are actually networks of interacting cells where these can interact with both eliciting as well as suppressive signals (hence we call these networks "frustrated"): in the neural scenario, the spiking cells can be excitatory or inhibitory hence frustration shines and, along the same lines, even in the immune teather we have a quite similar sitation. Indeed, while Helper T-cell secrete cytokines (the carriers of their dialogues) that promote mounting an immune response (e.g. the secrete cytokines act as proliferation signal for killer T cells and mature B cells once received), at contrary, suppressor T-cells secrete cytokines aiming at quiescience (namely chemical messengers promoting anergy and, eventually, apoptosis):  networks of frustrated elements (i.e. elements, namely cells, whose perceived signals can be of conflicting nature) are well known in the statistical mechanics of complex systems as these are ultimately "spin glasses", hence the link with Theoretical and Mathematical Physics where these systems have been extensively investigated.
Interestingly, while statistical mechanics of complex systems has been largely and succesfully applied in the neural world, there is still a long way to go in order to achieve the same results in the immune world but it is a journey that is worth the efforts as there can be non-trivial phenomena -as the conditional reflex studied by Pavlov in the neural branch- also in the immunological counterpart.

In these regards we investigated, following the outlined perspective, the cases of fibromialgia and chronic fatigue syndromes because those are states of apparent infections (with all the related unpleasent conditions as persistent fatigue, intermittent fever, pain spread over the body, cytokine storms, etc.) despite a true pathogen is not present in the host: we gave an explanation of this phenomenon by means of an analogy with the conditional reflex in neural circuits as ante litteram discussed by Ivan Pavlov (see e.g. this link).
We conjectured that, as the timescale of typical diseases (say a flu) is O(1 week), while there can be viruses -as the Epstein-Barr one (carrier of the glandular fever or mononucleosis) that may last for months. The prolonged exposure to the pathogen may correlated dynamics of different agents (lymphocytes) accross different timescales inducing non trivial correlations in the immune system, which could explain why, even if the pathogen has been removed (or locked within its "neural hides"), the immune system may remain "alterated", "fighting", thus developing a flu-like pathology even in a healty body.
​
The following pictures show our logic scheme.
Powered by