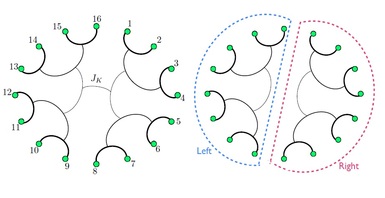 HIERARCHICAL NEURAL NETWORKS In the last decade, extensive research on complexity in networks has evidenced the widespread of modular structures and the importance of quasi-independent communities in many research areas such as neuroscience, biochemistry and genetics, just to cite a few.
In particular, the modular, hierarchical architecture of cortical neural networks has nowadays been analyzed in depths, yet the beauty revealed by this investigation is not captured by the statistical mechanics of neural networks, nor standard ones (i.e. performing
serial processing) neither multitasking ones (i.e. performing parallel processing). In fact, these models are intrinsically mean-field, thus lacking a proper denition of metric distance among neurons. Hierarchical structures have been proposed in the past as (relatively) simple models for ferromagnetic transitions beyond the mean-eld scenario -the Dyson hierarchical model (DHM)- and are currently experiencing a renewal interest for understanding glass transitions in finite dimension.
Therefore, times are finally ripe for approaching neural networks embedded in a non-mean-field architecture, and this letter summarizes our
findings on associative neural networks where the Hebbian kernel is coupled with the Dyson topology.
First, we start studying the DHM mixing the Amit-Gutfreund-Sompolinsky ansatz approach (to select candidable retrievable states) with the interpolation technique (to check their thermodynamic stability) and we show that, as soon as ergodicity is broken, beyond the
ferromagnetic/pure state (largely discussed in the past), a number of metastable states suddenly
appear and become stable in the thermodynamic limit. The emergence of such states implies the breakdown
of classical (mean-eld) self-averaging and stems from the weak ties connecting distant neurons, which, in the thermodynamic limit, effectively get split into detached communities. As a result, if the latter are initialized with opposite magnetizations, they remain
stable.
This is a crucial point because, once implemented the Hebbian prescription to account for multiple pattern storage, it allows proving that the system not only executes extensive serial processing a la Hopeld, but its communities perform autonomously, hence making parallel
retrieval feasible too. We stress that this feature is essentially due to the notion of metric the system is endowed with, differently from the parallel retrieval performed by the mean-field multitasking networks (whose development we achieved in the past three years) which require blank pattern entries.
Therefore, the hierarchical neural network is able to perform both as a serial processor and as a parallel processor.
We corroborate this scenario merging results from statistical mechanics, graph-theory, signal-to-noise technique
and extensive numerical simulations. 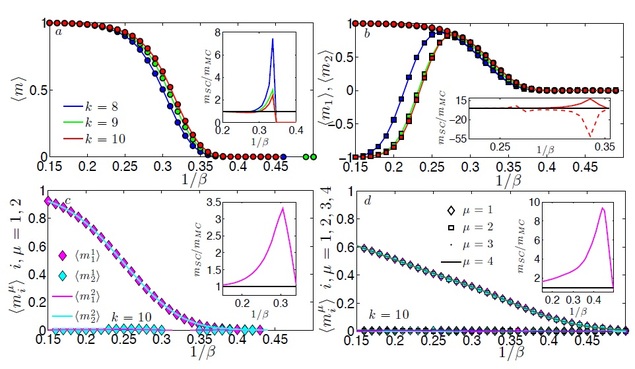 Panels a and b: Magnetizations obtained via MC simulations of the Dyson Hierarchical Model for different sizes (main figure) and
comparison with theoretical curves obtained by our research group (insets).
Notice that the spontaneous switch between serial and parallel state in panel b is a finite-size effect.
Lower panels: Mattis magnetizations obtained via MC simulations of the HHM (main gures) and comparison with theoretical curves given
by theoretical predictions (insets) for p = 2 (panel c) and for p = 4 (panel d).
The noise level in analytical results was rescaled to collapse on the one numerically estimated via Binder cumulants. 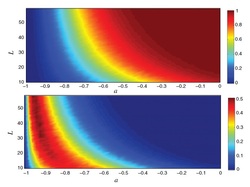 SMALL WORLDS One of the most stricking features of these networks is their natural ability to clusterize and behave as small worlds. In these plots at left we show the clustering of the nets by varying the tunable parameters network size versus network dilution and in the "red regions" (tha occupy a huge area of the whole plot) small world behavior is preserved.

It should be noticed that no rewiring is performed to obtain this feature, rather, a topological phase transition, splitting network behavior from Erdos-Renyi-like to Watts-Strogatz-like, comes to play. 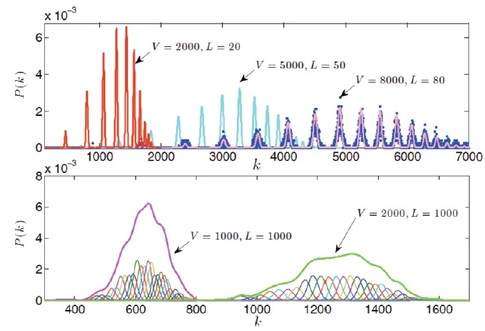 These plots at the right show the network's fringes.
To be deepen. 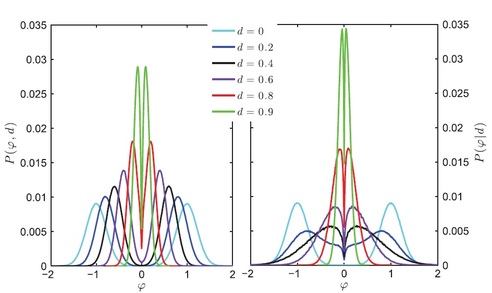 The figure at left shows the field insisting on a neuron in two different types of diluted neural networks: on the left we studied the Sompolinsky dilution -roughly speaking an Hopfield network on an Erdod-Renyi random graph- while on the right we show the fields of our multitasking associative networks -roughly speaking an Hopfield network with diluted patterns obtained by marginalizing a diluted Boltzman machine-.   d stands for "dilution" such that for d=0 both the extensions recover the Hopfield model, while as d increases they start to differ.
The difference among field distributions in the two networks is remarkable as, in the former, dilution roughly makes smoot and tending to zero the fields, while in the latter, dilution (above a critical value) broadens in a not-trivial way the fields and allows for parallel processing. 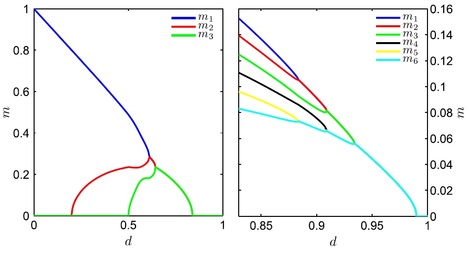 As a result of our dilution, different Mattis overlap become stricktly positive without collapsing the system in a spurious state (typical of the underlying glassiness the network is built with). These two plots show Mattis overlaps (different colours mimicking the retrieval of different patterns) at various  level of dilution.
Again for d=0 the system behaves as a standard neural network (Hopfield model), while for d->1 the system becomes a paramagnet and in between it behaves as a multitasking associative networks, that is, the system is able to contemporarily handle multiple patterns, thus accomplishing parallel retrieval. 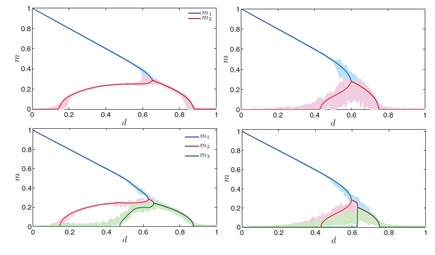 The picture on the left shows other examples of parallel retrieval but this time in the presence of fast noise: clouds represent noise affected trajectories resulting from simulation achieved with Glauber dynamics (and not deterministic steepest discent or similar minimization procedures).
Powered by